In the Service of the Martini

“The Martini is the only American invention as perfect as the English sonnet.” —  H. L. Mencken

When I confronted my first Martini in April 1973, poolside at Cambridge Beaches in Sandys Parish Bermuda, I didn’t give much consideration to the glass it was served in.  I ordered the drink on the rocks, with a lemon twist.  After the initial shock of its dreadful taste (does anyone really like the taste of gin?), I managed to work my way thru two, perhaps three, perfunctory sips when the legendary lethality of the fluid began to dull my senses to 6.5 on the “numb scale” (who was it who said that a good Martini enjoyed under a mid-day sun was a form of liquid Percocet?). I had a second, less regrettable Martini (all before lunch arrived), and maxed out on the aforementioned numb scale.

It took me the balance of our vacation to perfect my deep appreciation of a Martini on the rocks.  But this much was clear to me:  at age 23 I had finally found my drink!  And not some dumb frou-frou drink that comes with a mini umbrella, cherry, orange slice & a pineapple chunk!  My cocktail oozed with sophistication!  But there was still room to up my game.

I can’t recall when I switched from a rocks glass to an “up” glass.  But I did.   The up glass (hereinafter referred to as the Martini glass) is immediately recognizable from yards away as containing a sinful concoction that only the most literate, urbane and polished citizens consume.   There is no better exemplar of these traits than William Powell’s portrayal as Nick Charles in the Thin Man franchise. 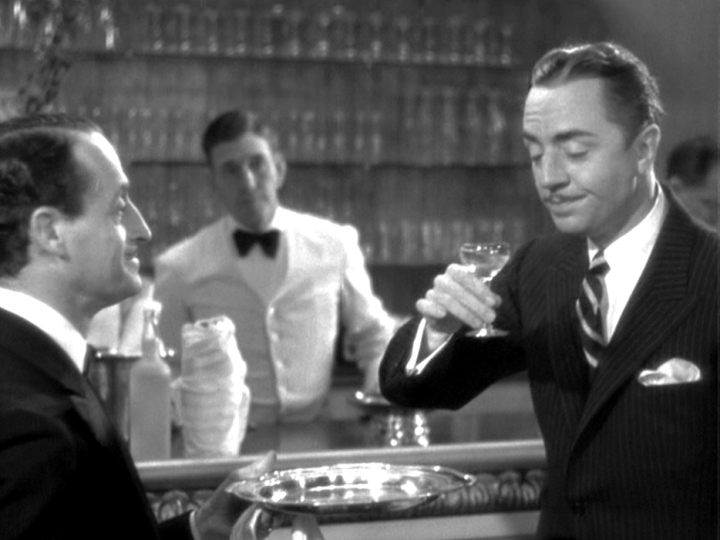 Before we go further.  A Martini is made with gin and dry vermouth.  A vodka Martini is a second fiddle variant, and should only be considered as such.  And putting frou-frou ingredients (liquors, juices & coloring agents) into a Martini glass and then assigning a Martini designation to the drink is criminal.  It’s like slipping the text of Green Eggs & Ham into the cover of Anna Karenina.

I do recognize that substituting vodka for gin got a huge boost when a succession of actors portraying James Bond indulged in the alternate form. They all get huge points for style.  But vodka has no class.  As a commodity vodka is best remembered as a State Monopoly for the Tsars. The expensive chic vodkas are just vodka in fancy bottles that cost more.

For the height of debonair cool it is hard to surpass Cary Grant.  As Roger Thornhill in Alfred Hitchcock’s North by Northwest he is under suspicion for committing a murder, and while travelling the rails on the Twentieth Century Limited to escape apprehension, he has time to sit across from Eva Marie Saint in the dining car and order a Gibson.  Grant gets 10 extra credit points for ordering a Gibson without further identification… as in a Gibson — Martini.  Experienced bartenders know this.  A Gibson merely signifies using a cocktail onion in place of an olive or a lemon twist. No need for further elaboration. 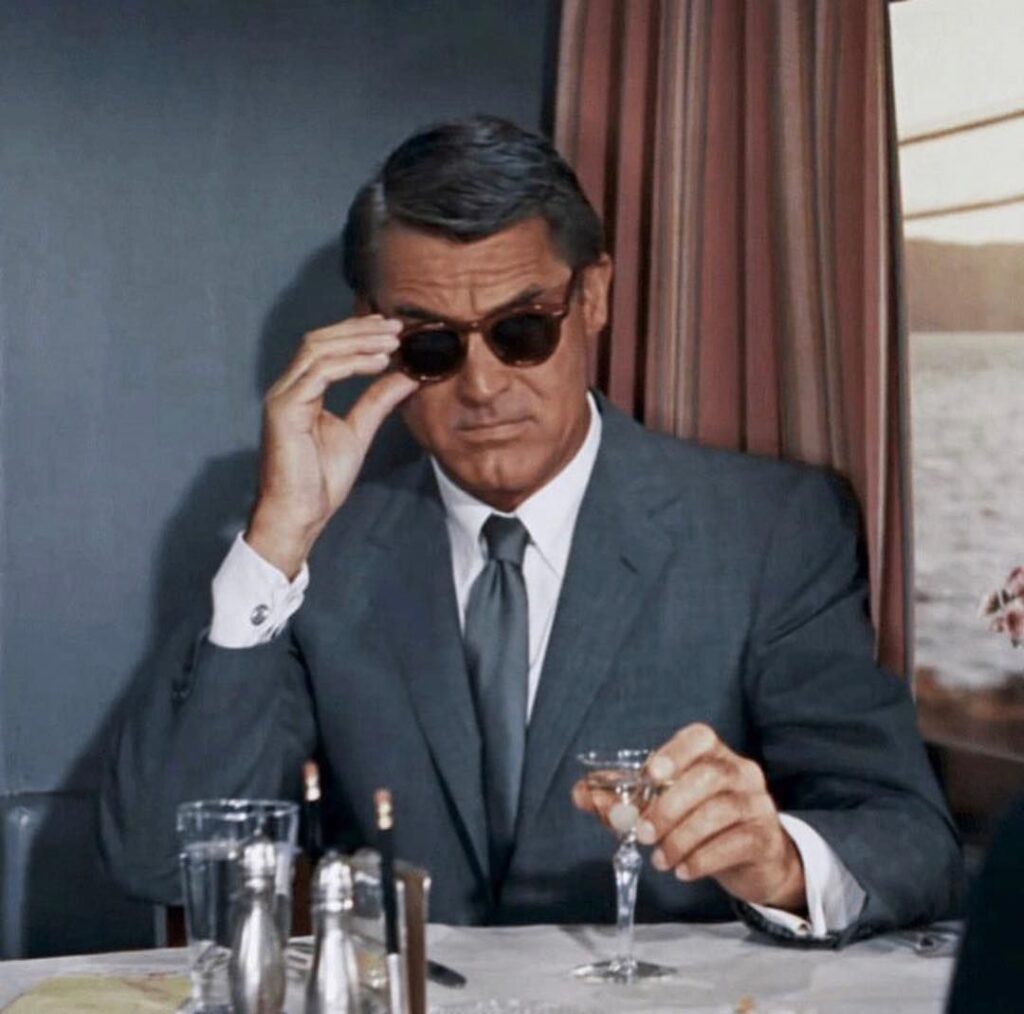 The allure of the Martini and its sublime excellence is not restricted to gentlemen.  Roger Angell in his essay “On the Art of the Martini” that appeared in the New Yorker writes, “At Lotus, at the Merc Bar, and all over town, extremely thin young women hold their stemmed cocktail glasses at a little distance from their chests and avidly watch the shining oil twisted out of a strip of lemon peel across the pale surface of their Martini like a gas stain from an idling outboard.”

Bette Davis as Margot Channing in All About Eve displays in her role an independent spirit combined with a tinge of protective indignation.  She would be challenged by the presence of a young ingénue, Eve Harrington, and Eve’s interest in her beau… after knocking back two Martini’s and then grabbing a third, she intones to her assistant Birdie (Thelma Ritter), “Fasten your seatbelts, it’s going to be a bumpy night.” 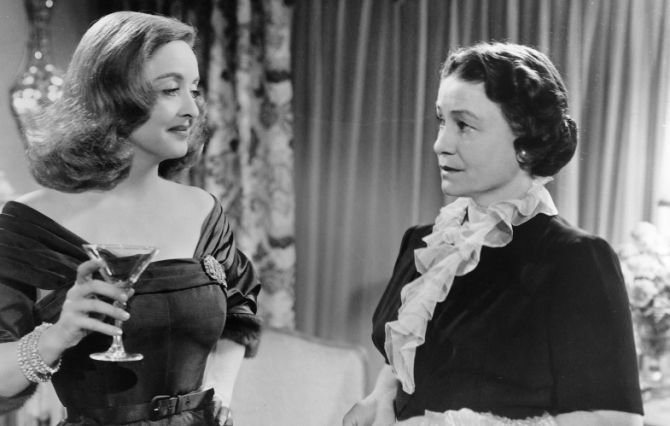 Happily the pursuit of a well-made Martini is not restricted to the dens of privilege.  What could be further removed from the Round Table at the Algonquin than a MASH unit in South Korea?  Yet the civility of the Martini crept into the tent of Dr. Hawkeye Pierce (Alan Alda).  He brought a heightened irreverence and exuberance to the consumption of a Martini.  No longer shaken, not stirred at the gaming tables of Monte Carlo. No longer sipped by well-groomed denizens of wealth in black-tie or gown. No. Here is an educated, smart-assed surgeon in army fatigues using ingenuity (and desperation) to craft a functioning still… an enterprise to beat back the insanity of war and ensure that a modicum of civilization could prevail. 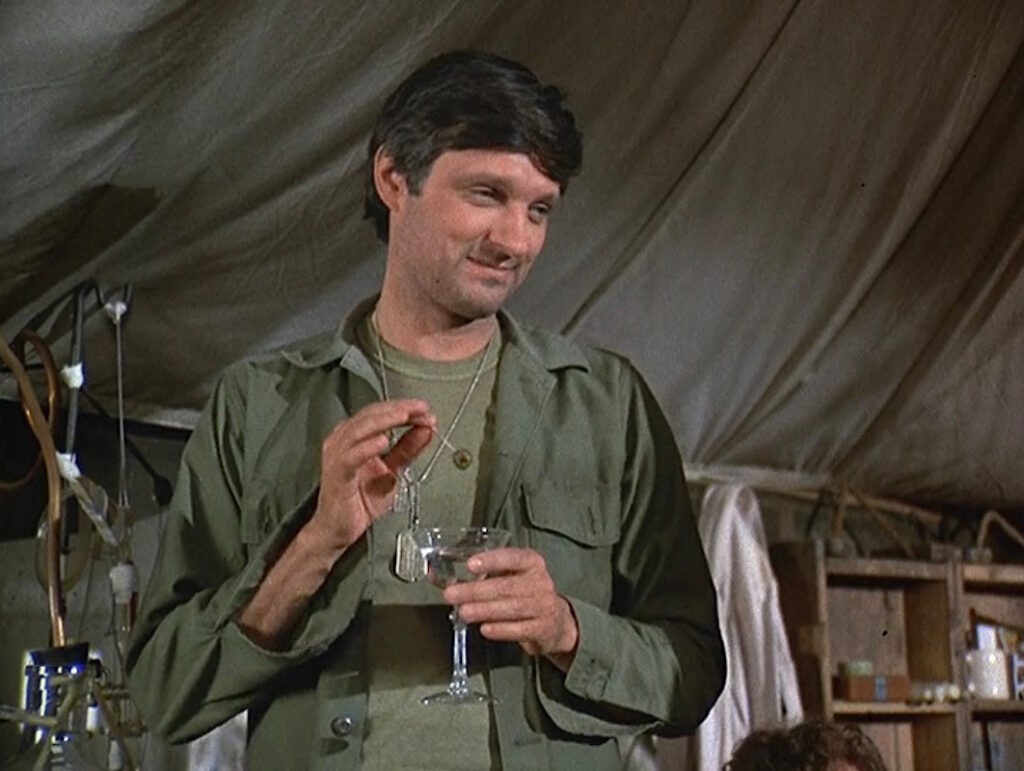 So you can see… standing at the Oak Bar, seated in the dining car of the New York Central, or on a cot in an overseas canvas residence… civilization’s reach can extend to every nook and cranny of the globe… even to an Adirondack chair on a deck in Woodbury, CT.

This entry was posted in Life. Bookmark the permalink.