Before crossing the Rubicon River in 44BCE, Julius Caesar took time to time to write to his ally and colleague, Brutus…

I am ready to make my return to Rome.  I am bringing a Legion, and knowing that it is a violation to Roman Law and authority, I am prepared to bring battle to my opponents. The blood of my enemies will flow like a river. I will win. I will rejoice in their agony.  I will put dung beetles on their rotting corpses!  On the lighter side, in my baggage train are 20,000 cases of wine from Gaul (it’s good to be Caesar!).  I have Sancerre from the Loire, crisp Rieslings from Alsace, all the Grand Cru Burgundies, excellent Hermitage and Côte-Rôtie, I took all of the Ch. Cheval Blanc that I could get my hands on and some delightful sipping Rosés from Provence. Oh, and some cheddar cheese from Britain.

Once I have defeated that weasel Pompey and all the Senators that support him, I want you to arrange a triumph.  I want floats, bands, caged beasts and prostitutes.  After a week of frivolity, we are going to open the J. & B. Wine Emporium… Julius and Brutus!  I have purchased a perfect location on the Appian Way (plenty of parking for chariots and ox carts!).  I have even thought of our slogan… “Wines for the Nobility at Citizens’ Prices!”  You and I will be rich and I can pay off my substantial debts.

And so Brutus… how’s by you?

The response from Brutus…

I am looking forward to your return.  Pompey is actively plotting against you.  But you will win Julie… Ev’ry guy here’d love to be you Julie, even when taking your lumps. There’s no man in town as admired as you, you’re ev’ryone’s favorite guy. Ev’ryone’s awed and inspired by you, and it’s not very hard to see why. No one’s slick as Julie, no one’s quick as Julie, no one’s neck’s as incredibly thick as Julie’s. For there’s no man in town half as manly. Perfect, a pure paragon! You can ask any Tom, Dick or Stanley and they’ll tell you whose team they prefer to be on!

I’ll begin planning the triumph.  I’m thinking your float can have vine cuttings from Gaul and a miniature villa.  You will be riding on a donkey in front of it dressed like Bacchus with a fake beard, surrounded by an entourage of nymphs, fawns and centaurs! As for the Emporium… the slogan works! But I’m thinking that B. & J. Wine Emporium has a better sound… Brutus & Julius. 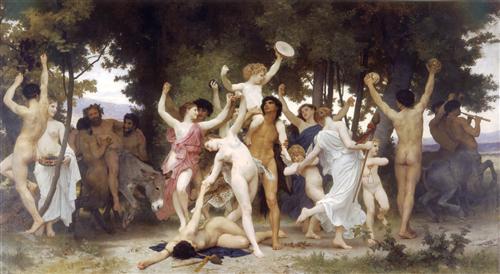 From the Desk of Caesar

I want to run an “Ides of March Sale” tomorrow. Move all the cases of the 47BCE Bordeaux to the front of the shop and mark them down 50%.  They’re past good drinking and we might as well convert those cases into cash.  Put the Port’s and Madeira’s into the remainder bins, down 35%.  But send a case of Rainwater Madeira to Lucius Cimber.  Charge that dirt bag full price.  Create a mixed display of Whites — Albariño’s, Pinot Blanc’s and Grüner Veltliner’s and make a large sign “Special Sale, Flavorful Weekend Whites Now 20% Off Suggested Retail Prices!”  And then a smaller sign underneath “While Supplies Last!” We got to begin pushing white wines.  Set up a wine tasting table for Riesling, Gewürztraminer and Torrontes.  Put the sandwich board sign next to the table “Add some tasty spice to your Holiday Table — Today Only 25% Off!!” Something else… I just cut a huge deal with one of our distributors who is going out of business (actually I had him murdered… it’s good to be Caesar!) — Clear some space near the fire exit in the back, we have 200 cases of Châteauneuf du Pape and 20 cases of Krug Champagne coming in.  Oh, and also three wheels of Jarlsberg cheese.  Have two sent up to my Villa, and the third over to that goniff Gaius Casca with my complements.  I will meet with these nuisance Senators tomorrow.  Please plan an orgy for the evening.  What Senator doesn’t love a good orgy!

The Ides of March, Brutus overheard muttering as he left the Theatre of Pompey, “B. & J. Wine Emporium has a much better sound…”

n.b. The line “And so Brutus… how’s by you” in its orignal Latin appears as Et tu, Brute

This entry was posted in Ministry of Humor. Bookmark the permalink.

1 Response to A Business Partnership in Antiquity Gone Bad