So, Felicity it is 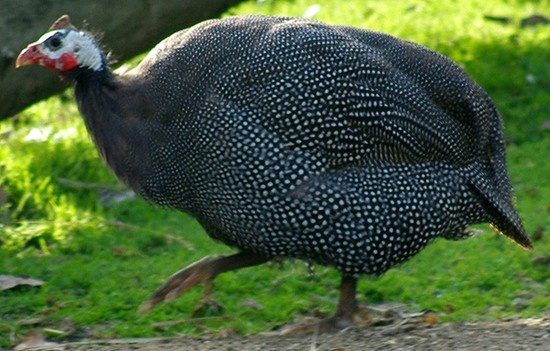 Felicity?  I know, I know… not a great name for a Guinea Hen!  But what could we do?  The fancy, shmancy breeder had already named her Felicity!  I wanted to name her Margaret, or Elizabeth, or Eleanor, or Sacagawea, or Dolly. {Stop right there!  I know what you’re thinking!!  “Yeah, Jim! Sounds just like something sexist that you’d think of! Dolly Parton & big breasts!” Well… Margaret Meade had breasts, too!  Although maybe not as impressive.   And besides, I was thinking of Dolly Madison!}.

So, Felicity it is.

Yes, I detect puzzlement in your expression.  Wherefore Guinea hen?  OK, so I was leafing thru a past issue of Smithsonian and there was an article that caught my eye: “The Uncommon Intelligence of the Guinea Fowl.” It turns out that these birds are more than your next dinner!  Smart as a whip, they are!  As smart as mynah birds, ravens, cockatoos… and according to the Director of Animals and Society Institute of Ann Arbor, Guinea fowl posses the intelligence on par, or better, than an octopus or a common house cat. Although further study is needed, he said, and I quote, “I wouldn’t be surprised after additional testing that a Guinea hen will be seen as intelligent as a bonobo ape, just lacking opposable thumbs.”

I admit that Sandy, while intrigued, was not keen on adding a Guinea Fowl to our household.  I pointed out that she had previously excluded dogs, cats and silverback gorillas from our home… but no prohibitions about Guinea hens or wolverines.  Would she rather have a hen or a wolverine?

So, Felicity it is.

The breeder, Mrs. deVargas, was a total whack-job, she insisted before signing the papers for Felicity, that Sandy and I prove that we had college degrees. We also had to sign a statement that we didn’t smoke, and that we were vegan (yes, we lied about the vegan thing). We then all sang the Star Spangled Banner. Ceremony and  paper work taken care of, Mrs. deVargas (I think that she was probably in covert-ops, and breeding Guinea fowl was just her cover), bid us farewell and sent us off with an “alphabet board”, instruction pamphlet, well wishes and, oh one more thing… “Felicity doesn’t like reggae music.”

Alphabet board?  Let me explain.  It turns out that Guinea fowl can be trained to understand commands and actually spell common words.  This is done by placing food treats on squares on the alphabet board… each square containing a letter. I used pistachio nuts as an inducement to peck at specific letters. She actually preferred the shells to the nuts.  Go figure.

She was a quick study.  Although she had trouble with vowels.  After a particularly exhausting training session, I just lost it and asked her, “Why did the chicken cross the road?”  She glared at me and then pecked out, ”G fck yrslf.” She came within an eyelash of being turned into Felicity ala Marsala!

This problem with vowels had gotten the gears in my mind spinning.  Biblical Hebrew was written without vowels!  Maybe Felicity was some sort of Orthodox hen? I tinkered with the idea of creating a Hebrew alphabet board and seeing if I could train her to peck out the kiddush (the blessing for wine).  After some thought I decided against it, and put the alphabet board away.  The entire exercise was proving too stressful for both Felicity and me.

I have moved onto other avenues with her.  Music.  Did you know that female Guinea hens can chirp? Well, not really chirp… more like half way between a chirp and a hum.  This behavior is not meant to attract males, but as a means of communicating and keeping track of new born chicks.  After six months of training, Felicity had the Canon in D down! Although she prefers Irish drinking songs!  And the best part is that mimicking music comes naturally to her, no need of going thru bags of pistachio nut treats.  As it turns out, pistachios, the nuts or the shells, give Felicity a world class case of gas.  And heaven help you if you are at “ground zero” when Felicity cuts a fart!  One time Sandy missed the early warning sign — Felicity raises her left leg, always the left.  Unlucky, Sandy strayed too close to the blast zone and before she could retreat to safety the knee-buckling stench cracked the crystal on her wrist watch (and other gruesome things, too nauseating to mention here).

In spite of this unfortunate gastric reaction to pistachios, I have to smile… Felicity is part of our family.  I now use shredded mini-wheats instead of pistachios for treats. The grueling training sessions are past, and Felicity now enjoys being read to.  She loves John Irving novels and Shakespeare.  Shakespeare!  I have to shake my head… it took me decades to begin to love Shakespeare! Oh, one last note – Mrs. deVargas had it right!  Felicity does not like reggae! If she hears a Bob Marley track, she begins to raise her left leg and Sandy and I have to scramble to kill the song!  Who is training who?

Felicity… she is in command.

This entry was posted in Stories & Brief Tales. Bookmark the permalink.