I was born and raised in New Haven, CT; and as such, from birth I was hardwired for Pizza, or more appropriately, groomed to participate in the debate over the relative merits and ranking of New Haven’s three anointed Pizza Emporiums… Pepe’s, Sally’s and Modern. {first small aside, many locals prefer the “purity” of the variant spelling seen in Sally’s & Modern’s signage:  “Apizza”, and its pronunciation – a-beetz}. In spite of the on going controversy over which establishment is top dog, one thing is abundantly clear… we New Havener’s point to our Pizza, as a collective {second aside, I also have a soft spot for Ernie’s Pizza on Whalley Ave}, as the best in the country.  It is a source of pride, even community & gustatory hubris.

The spreading of the New Haven Pizza “gospel” to the balance of the American landmass can probably be best attributed to Yale University (New Haven’s other claim to fame).  Or better put, Yale students… who since 1925 (Pepe’s launch date), developed a love for Frank Pepe’s iteration of the Neapolitan tomato pie.  Cheap, tasty and addictive.  Then (and this is the key part), B.A. in hand, or Law Degree, or whatever else, these very same young men (women to a far lesser degree ‘til later in the 20th Century), returned to their homes in Grosse Pointe, Sewickley, Lake Forest, Ladue, Shaker Heights, Spartanburg & etc. to take up positions in the banks, investment houses, law offices, medical practices & etc.; and proceeded to getting on to their chief purpose in life: ruling the universe. Yet even in the rarified air of success and affluence, there is something of New Haven that played on their heart strings, that conjured memories of their youth… that pulled them back to that City (and it wasn’t Payne Whitney Gym or the Yale Bowl or re-visiting the classroom and the Profs)… it was the “smell” of Wooster Street! New Haven Pizza! It became an obsession!  An obsession magnified by the lack of quality Pizza that was available locally in their chosen homes.

Talk about something long enough in your workplace, in the boardrooms, with friends and family and the word is bound to get around.  And it wasn’t just Yale Alums who praised the quality of the New Haven “Holy Trinity”.  What about all those John Harvards and Princeton Tigers who took up seats on the opposing side in the Yale Bowl?  Where do you think those other Ivy League students (and Alums) went to eat before or after the football game? No secret here!

So you can well imagine that it was just a matter of time when someone (or several people as it turns out) would look to commercially exploit this pizza “obsession”.  Which is why there is a Nick’s New Haven Styled Pizzeria in Boca Raton, FL; a Pete’s New Haven Apizza in Washington, DC; a Salvation New Haven Styled Pizza in Austin, TX; and more “wannabes” too numerous to cite here. Proving once again that imitation is the greatest form of flattery.

But the substance of this essay is not about pizza.  It’s about the hotdog. Our hotdog.  You see, to the local cognoscenti there is another equally compelling story to tell.  But unlike Wooster St., which was walking distance from the Yale Campus, the undergrads would have had to drive to Jimmies of Savin Rock to tuck into the most splendid hotdog on the planet. And further, for the most part Jimmies catered to a seasonal summer crowd when the undergrads would have returned to their homes. Understandable then, that there would be fewer Yalies and outlanders who would have traveled across town lines to West Haven (West Haven! God forbid!), recognized the greatness of Jimmies, and then spread the word about a “drive-in” (in my days) that had all the look of common “festival” and cheap amusement park dives.  Fewer people knew about Jimmies.  Pepe’s et al.?  Truly great, but cosmopolitan.  Jimmies?  It was us!

Amusement park dive? Ahhhh… looks can be deceiving.  Particularly when you fetch the food from a counter, bring it back to your car, set up the trays of food on the hood and then have to ward off the circling seagulls from snatching an unattended,  perfectly plump fried clam, or… God forbid… your hotdog! {third aside, somewhat longer… there was a rustic charm to the seediness of Jimmies’ parking lot.  On a warm July Saturday evening, the parking lot would be chock-a-block packed. Folks on line to get food.  Folks sitting in their cars eating.  Folks standing outside their cars eating. Cars slowly circling thru the lot looking for a space to open up.  Music playing from car radios. Conversations, an occasional harsh word or two, laughter.  A thickness to the air.  Humidity and a light breeze coming off the Sound carrying scents of French fries, grilled hotdogs and briny clams on the half shell. Discarded food, cups and cardboard trays littering the strips of pavement between the parked cars.  And the ever present opportunistic seagulls waiting to participate in this outdoor feast.}

In 1925 James “Jimmie” Gagliardi opened a roadside stand near the Amusement park at Savin Rock {another brief aside, the same year that Frank Pepe “hung his shingle” on Wooster St}.  Gagliardi’s culinary innovation was to split a hot dog to more uniformly cook the dog and speed the grilling process.  Whether the Roessler’s hotdog was used from the get-go, I can’t say.  But for sure, by the time I hit Jimmies in the mid-1950s, Roessler’s of New Haven was the source for the featured hotdog, and the importance of this detail can’t be exaggerated.  There was a symbiotic relationship between grilling technique and the key source ingredient that produced a hotdog that retained a “crunch” when you took a bite.  And that light snap survived thru a coating of mustard, relish and kraut.

And also of paramount importance, the roll was perfectly suited for the finished dog. Not some thick “pillow” of a roll, but rather a thin layer that was slightly toasted on the grill.  Nearly delicate! Dog placed into the bun, no major adjustment was necessary.  The roll compressed superbly into the sides of the dog, condiments added if desired, and in all likelihood, half your first hotdog would have been polished off by the time you reached your car.

By the 50s the modest stand had already seen a couple of moves, and at least one enlargement (including an inside dinning room).  Jimmies was now in capable hands of Sal (Jimmie’s son).  The food counter was divided into three parts with independent registers… on the far left: clams on the half shell were chucked and ready for immediate consumption (as a teenager, the fresh clams were my appetizer course).  On the far right: the station where you picked up your beverages… I loved the non-carbonated pineapple drink.  Center stage was occupied by the grill and the place where you ordered hotdogs, French fries (none better), lobster rolls (hot & butter soaked), fried clams (divine)… and that’s where my interest stopped, although I am sure other items were on the menu as well.

Patrolling the grill (and the center register) on summer nights was the responsibility of Tony DeLucca.  Whatever Sal paid Tony, it wasn’t enough… it wasn’t enough by miles.  Waiting on line to place an order at Jimmies was a form of entertainment just watching Tony ply his trade… maneuvering rows of hotdogs lined up on the grill like a Greek phalanx.  Dogs placed on the grill by a helper, then Tony would take charge, turning the rows, then deftly slicing the dogs to their characteristic split (fancy TV chefs today would nod approvingly at his speed and accuracy), turning the rows of dogs for reverse side grilling, turning once more for exposed side grilling, then the placement of dog into roll, onto a tray, then to combine with other items ordered: fries, fried clams & etc. (picked up from frying stations behind the main grill) and added to the tray, or second tray, and then the stunning element of this experience… Tony would have calculated what you owed in his head, had the sale rung up in the register, hand out for your cash… and all the time never missing a beat with marshalling his never ending rows of hotdogs.

Hard not to sound like an “old fart”… but although Jimmies is still in business today.  It just ain’t the same.  Roughly in the same location. Still owned by the Gagliardi family. Few of the elements that made it an attraction for me are in play today.  Do I miss having to navigate a path to the counter thru a dropped-food minefield of stepped-on French fries, blobs of ketchup, mustard and the like?  No.  How bout having to keep an eye out for the cruising seagulls overhead ready to clear their digestive tracts?  Take pass on that, too.

Yes, I miss the smell.  I miss the informality and feeling of community in a shared activity – finding a parking place, walking up to the counter, standing on line cheek to jowl with others, conversations overlapping, probably recognizing a half dozen folks, schlepping the food back to the car and eating under the stars.  There was a wonderful consistency to the experience.  The food was in balance within the setting. Do you really want to eat hot dogs and fried clams from a china plate?  The cardboard container filled with fried clams (and a lemon wedge perched on top) was fine for me.

The new Jimmies is now a dinning room experience.  China and cutlery. An elaborate menu.  Waitstaff.  Beer and booze.  Marvelous windows look out to the Sound.  But where is the smell?  Where is Tony DeLucca?

Although I think the French fries are as I remember, what about the dog?  Aye, there is the rub.  Roessler’s is long out of business after surviving a brief revival in Norwich.  And from what I can tell from my last visit, I think the hotdogs aren’t being made on a flat top grill any more.  My dogs looked like they had been split and made under a broiler.  I consider this a setback on par with Pluto being declassed out of planet status.

I have taken on the challenge to make “THE Hotdog.”  But let’s be clear, trying to re-create the Jimmies’ hotdog of yore would be like trying to re-stage the Battle of Agincourt.  It ain’t happening. My effort is simply to make an exceptional hotdog.

First, lucky for us all, there is another New Haven hotdog company making a damned fine dog:  Hummel Bros.  I use the “big bite” size.  Next, I have switched to the top split roll {last aside, this type of roll is called “New England” style. New England is also a designation for a style of Lobster Roll served cold, made with mayo and served with lettuce!  It reeks of upper crust gentility and should be avoided at all costs!}. I have been very unhappy with commercial traditional side split rolls.  Too thick.  Top split rolls are thin, light slice-of-bread like.  Much better for pressing into the finished dog.  Lacking a flat top grill, I have opted to cook my dogs (scored, but unsplit) on my barbeque grill.  I have also decided to up the ante on condiments to “banquet” level.  Subtracted: mustard, relish & kraut.  Added: shredded jack cheese, crumbled applewood smoked bacon & topped with a cup of Jim’s Famous Invisible Rattlesnake Chili (8 hour, slow cooked and I have provided the recipe below).

P.S. The above recipe notwithstanding, more often than not, I scarf down my dogs with just mustard and relish.  Never been much of a sauerkraut guy. 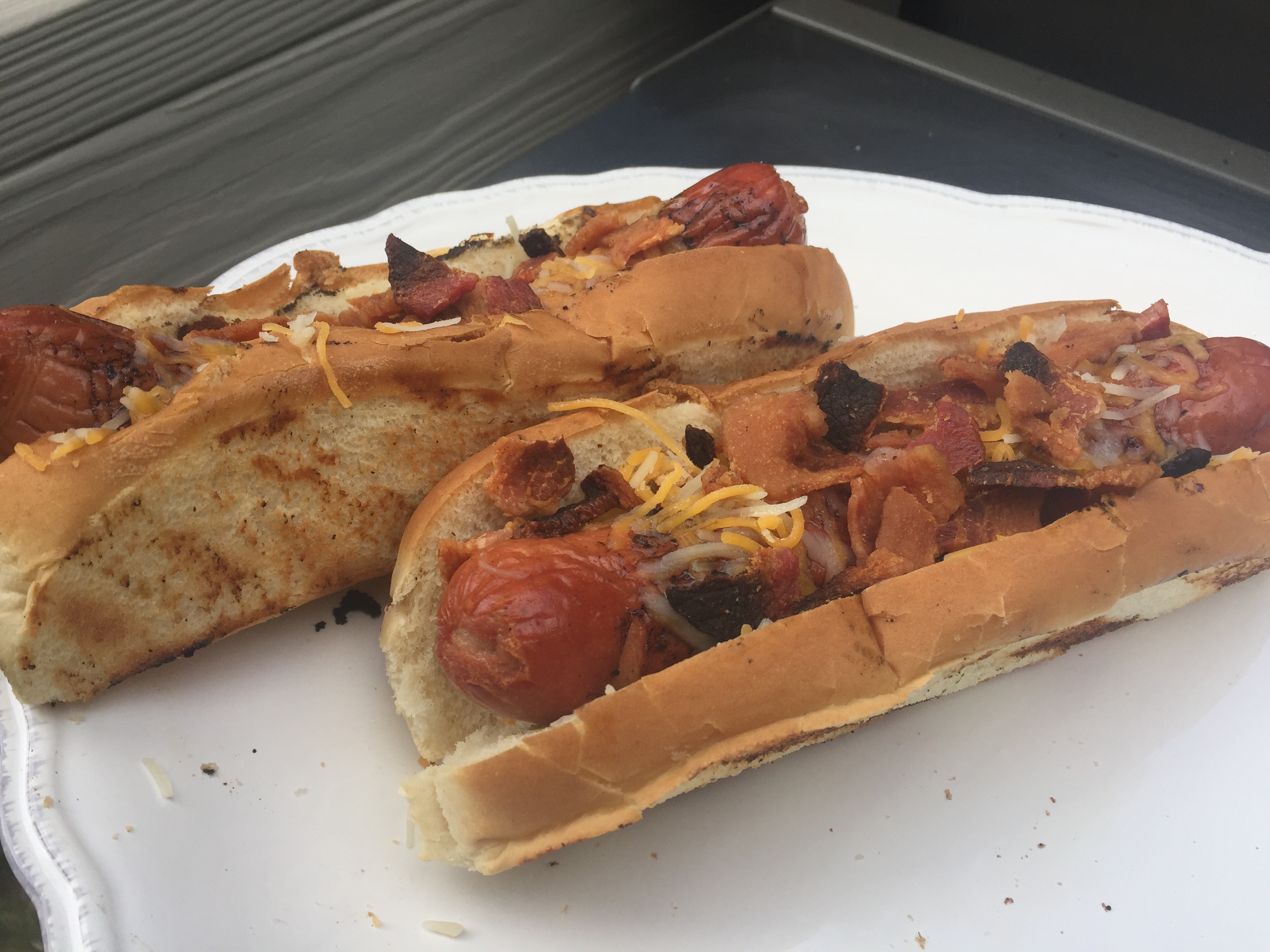 This entry was posted in Life. Bookmark the permalink.